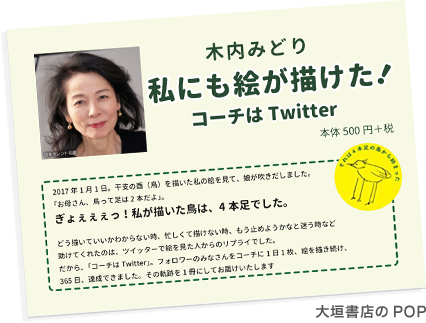 Long time ago, I was asked “What’s that ? Is it an apple ?” I still remember the moment when I quickly hid the picture behind my back and became tense.
It must have happened when I was four year old.
At that moment, heavy door closed firmly and something turned into stone.
Even since then, I refused to draw. I couldn’t draw.

How did I manage the art class in elementary school ?
When I was told by the teacher to draw and submit, I had to follow. Probably, I drew something but I cannot recall just how I did.
When I had to draw a picture for homework during summer holidays, I always asked my mother who loved to draw and was good at it.
My mother didn’t scold me.
I felt like as if my mother and I were comrade sharing a small secret. And the teacher couldn’t discover our secret.

In our country, it’s mandatory for all children to go to elementary school and junior high school, even for the children who hate school.
I graduated junior high school and entered to high school, but I realized clearly that I got bored with school and only thought of how to escape from the situation.
I didn’t tell my parents that I wanted to quit school because I didn’t want to make them unhappy.
So I came up with a plan to find what I really wanted to do, so to convince my parents, I got into a “finding the place to go” mode.
One day, I was caught by a newspaper advertisement announcing “Entries for members of a theatrical company.”
“Company” of “Theater” ••• What’s that ?

I took an examination, and somehow I passed, and became a member.
I quit high school on my sophomore.
In that theatrical company, qualification for examination to the production unit and script writing unit was over18 years old, and that to acting unit was over 16 years old. I was 16 years old, so I could only apply to the acting unit.
I was shy, socially awkward, and I hated doing something in front of people. But I joined the company because it was better than going to school.

Since then, things just happened to turn out my way, and I was an actress when I noticed.
Even now, I feel foreign to the role of actress, and I don’t believe I’m suited to be an actress. I’ve lead my life just being fascinated by creating things.
I have to have friends in the creative field.
Whatever they be professionals of amateurs, they are poets, writers, musicians, dancers, designers and illustrators.
I have some painter friends.
I got to know my preference in paintings and bought some of them which were affordable for me.
Even though, I had never drew any pictures.

On New Year’s Day last year, 2017.
After the ceremonial breakfast on New Year’s Day, I was chatting with my husband, and my daughter was looking through New Year’s greeting cards from our friends.
Suddenly, my daughter said,
“Mum, please draw a picture of a bird.” She had a mischievous twinkle in her eye.
There were many New Year’s greeting cards with images of birds because 2017 was the Year of the Rooster. There were illustrations, pictures and photos of birds.
My daughter teased me as she knew that I’d never draw pictures.
I was a bit annoyed.
“No problem. I can draw a bird”, I retorted. I quickly drew a bird on a postcard with a ballpoint pen.
My daughter watched me and broke into laughter.
“Mum, don’t you know a bird has only two legs ?”
What !
The bird I drew had four legs.
Oh, my God !

“Mum”, she said, “please draw everyday. I want to laugh everyday. Ha-ha !”
I didn’t feel bad when I heard what she said.
When I was four year old, I was frightened by hearing “What’s that ? Is it an apple ?” but I didn’t feel bad by hearing “What’s that ? Is it a bird ?” from my dear daughter.
And I even thought that, why not respond to her provocation ?
“Why not. One picture per day. Alright, I draw. You can look forward to it.”
It was a trigger for me to draw one picture per day.
If I do so, why not put up it on Twitter everyday ?
I didn’t think that this would last long. May be up to a week or 10 days.

But, but •••
Drawing is an endless series of discoveries.

I was supposed to see so many dogs, cats, birds during my life of 60 and some years.
I lived with so many cats in the past: Tora chan, Tabi chan, Fur, Kurumi chan, Ebizo, Danjuro, Jamco ••• But I couldn’t draw cats. I didn’t know how to draw.
What have I been observing ••• ?

I also noticed that time passes moment by moment and never stays put.

Yes. The life will end.
No one can escape from death.
Fatality rate is 100%.

Even since I started to draw, every hour from morning to night became more vivid and distinguished
I began to notice what were valuable and dear for me, not for anyone else.
I felt strongly that value judgments of others had nothing to do with me.

Drawing is to organize one’s mind and to be aware of, console and encourage one’s self.
People sing when they want to sing and dance when they want to dance.
Nobody should judge if it’s good or not.
So I want to say to everyone, please don’t hurt children, please don’t evaluate others.
Desires for singing and dancing is like a delicate balloon. Even by a single word, it can burst.
Once it burst, it’s the end. It cannot be blown up again.

Nobody can see a wound in the mind.
Even the person who has a wound needs to forget the wound to survive.
So people stop singing, dancing and drawing pictures.

But even a person like me who drew a bird with four legs could draw after 365 days of trial.
It may not be considered a “Picture” from the standard of picture in the world.
But I don’t care to others’ evaluation.
When I draw, it’s my picture.

I heartily realized that drawing also consoles one’s self.
So. I want to recommend you to draw.
You, who think that you cannot draw, cannot sing, cannot dance, were hurt by someone.
People laugh at you and says “No good” or “Strange.”
But that’s not true.
Anybody can draw, sing, dance.
Get out from the environment that binds, evaluates and looks down on you and praise yourself.
You recognized and sometimes get carried away yourself.
One can only live once.
“Confidence” in Japanese is written with two characters meaning “believing one’s self.”
So believe in yourself with a gentle feeling, and draw.
Anyone can draw.

All of us can draw.

Thank you for viewing and reading my pictures and text.
How did you like it ?
I could not stop drawing after 365 days. And as of 21st August, 2018, it’s my 571st day.
It’s an unexpected surprise that I keep drawing for so long.
I was given some requests and advices for my pictures, such as having a solo exhibition, publishing a book, or printing T-shirt or postcards. I have been considering what to do.
Through out my long career in acting, I adopted the behavior not to go to places where “Others” tell me about my performance.
I wish to live in an environment without criticism, evaluation, scoring, passes or fails. So, I tried my best in everyway possible to make my life comfortable.
I discovered many things by drawing pictures for 365 days.
Drawing is interesting and great fun, therefore I wanted to make a book as a memory.
After I thoroughly considered it, I went ahead.

I have a radio program on internet called “A Small Radio Station by Midori Kiuchi.” I produce and put out two sessions every month.
I established an incorporated association named “Small Radio Station” for this radio program.
I set up a “Publishing Unit” under this association, and publish this book.
It enabled me to become free from appraisals by others and “Instruction” which is referred to as “Advice” to make a “Good seller.”
There is no conflicts of opinions, constraints and a life of one’s own.
Yes, I can have my own way.
I become 68 years old in September. I want to live in my own way for the rest of my life.
I want to recoup my “desires to draw, to sing and to dance” which were criticized and minimalized by others in my past.
If you are also a person who “Cannot draw” and this book be of some help to you, it’s a great pleasure for me.
Let’s draw as we like !

In closing, I would like to thank you again.
Wish you all the best.

With my sincere appreciation to a freelance editor, Ms. Kuniko Nose.